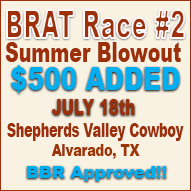 Where are you from? I was originally from Visalia, Calif. and now live in Hempstead, Texas

When did you start barrel racing? My grand parents and my parents all had race horses so I was always involved with speed horses. A man named Ralph Bell rented one of our barns and some pasture And he just happened to be president of the AQHA and stood My Texas Dandy, Robin Reed, and Double Bid there. He got me started showing and running his horses.

Are you involved in any other equine events? I was a 4H leader for 11 years

What was the name of your favorite horse and tell us a little about it. When I was in college my first year I was 5th at the national NIRA riding Fame Gold Shy The next 2 years I rode Brandy Cat To reserve world champion both years and also won the National Intercollegiate Rodeo Queen title.

After getting a couple of degrees I got married and moved to Texas. I bought Iron Bird at the Houston Stock Show Sale as a yearling and he went on to be Reserve world champion in barrels for the AQHA and 3rd in the poles. He also won 16 all around saddles. He has produced a lot of good horses but some that stand out are Night Bird Sonata who was TQHA armature jumping champion ridden endowed by Beth Hancock, Turn Em Tight Jessie who won a barrel racing futurity as well as both the jr. poles and barrels at the Houston Stock Show for owner, rider Robert Rodriguez, Wrangler Barry who was PRCA calf roping horse of the year and ridden. by Roy Cooper, Jet To Texas owned and ridden by Sallie Burleson to the NBHA Senior Champion 1D at the Nationals in Augusta and others.

Lances Ugly Boy Owned and ridden by Brittany Posey won the National High School Rodeo Championship this year as well as many other things.

My favorite barrel racer-Kelly Kaminsky Is my favorite barrel racer and a long time friend. In a round about way because of this she has Rocky, her good barrel horse. She was looking for a brood mare and a friend named David Bell was selling out his running horses. We went over there and Kelly bought this mare that was in foal with Rocky. They are currently in second place going into the finals at Las Vegas in the WPRA.