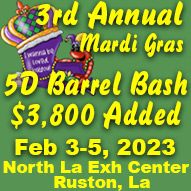 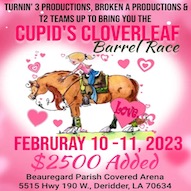 My mother knowing my desire to be a “Barrel Racer” did not have much money to spend on a barrel horse so when I outgrew ‘Ol Paint, at about the age of seven, she had Jewel Baize of El Paso, TX train a gray 4-year-old horse for me and although he was a nice horse we soon discovered that a baby on a baby just didn’t work! So we sold him and my mom scrounged up some money and we traveled to Farmington, NM to look at a horse that my sister swore by…he was a big sorrel flaxen mane Shoemaker gelding and sure enough he fit me like a glove. However the sellers decided after I rode him that maybe they just weren’t asking enough money so they jumped up the price.

We were on our way to Gonzales, Texas for a TYRA rodeo, when me and my parents were discussing what truck I was getting to take off to college. Mom says well your probably going to get my truck, which is a reddish F350 4×4 4 door. I was like oh mom your truck is a piece of junk, its falling apart…she said Courtney don’t say that…it has gotten us everywhere we’ve needed to go and its a very good truck. Well I think it was as little as 15 minutes down the road we heard a huge BANG…and if you could only imagine.. our turbo charger went out!!!

When I was young, my family in I went to a horse school in California. All of us were in different classes. I was so little that when I rode into the intermediate class they asked me if I wasn’t in the wrong class. Very seriously I looked at the instructor and told him, no because my mother was in the beginner class. They all got a kick out of that, and yes I stayed in the intermediate class the only child (9 years old) with the rest being adults.

I started riding horses and decided that the pasture was not enough for me, my dad rodeoed when he was little and he is what got me started.

One of my most memorable barrel races was: I was running to the first barrel and my hackamore broke and fell down around Lottie’s chest. by that time we were at the 2nd barrel, I had to use all my strength to pull her over, we went around the 2nd and then around the third and I ran a 17.0. well someone had shut the alley gate when they saw me loose my hackamore, and Lottie ran right up to the gate and stopped hard. I should of gotten off then, but I thought she was thru running, well not her, she headed back to the first barrel and just kept on going, doing a victory lap full speed around the arena. I just held on and this time when she stopped again at the closed gate I hopped off… I won the youth barrels that day, and I was so proud of her for doing the pattern by herself.

Where are you from? Rio Vista, Texas When did you start barrel racing? When I was 3 years old. Are you involved in any other equine events? Yes…

We asked which of the three horses is her favorite: “All of them have won things that meant a lot to me, like when Dumas was the BFA Derby Horse of the Year and Suzita won the Nacogdoches Futurity – I mean, she won so much stuff and I was such a beginner. Winning at Fort Worth was an all-time high. They have all done so much for me in their own way. You just could not believe how fast Suzita was; she would run anything but a perfect barrel pattern, yet when she wrapped every single barrel, she’d outrun them badly.” Dumas is still the leader with more than $100,000 in winnings with Suzita and Cookie running closely behind with $65,000+ and $50,000+ respectively.

I have been very fortunate to have several nice horses since I have started riding, just to list a few Cowboy Barshone and Beth’s Doc Solano both Western Pleasure Horses . Some of my most recent favorite horses are Royal Quick Maid, Tee’s Windy Lynn which are the two mares I am currently hauling. I guess I listed all of the above due to I have done most of my winning on them.

I really got started at a competitive level in my early 20’s, I was married to a horse trainer/ roper and I helped break and start colts and exercised race horses, a lot of horses came thru our barn and some of the rejects that didn’t make it on the track he gave to me and I started them on the barrel pattern, I fell in love with one of them and started hauling a lot to jackpots and open rodeos, my time and effort paid off and my colts were noticed , I learned that I had a knack for starting colts on barrels and selling them.

When I won my first saddle I did not tell hubby about it. It was so hard to keep quiet about it. I was in Waco and on my way home. I had my saddle, buckles, wild cards breast collars and checks, all stuff that I had won in my front seat. I was lost and really going fast and I saw a flasher in my side window. So I slowed down and a cop pulls up besides me and points at me to get over. So I pull over and he saids we have been chasing you for two miles!! I said well I cant see you as I have an 8 ft wide trailer behind me!! I said Im not a thief. He said what is all that in your front seat. So I explained to him that I had won it. I still got a speeding ticket. So I get home, and I cannot back the trailer up in the driveway and hubby always would come out and help me so he comes out and opens the door and sees all my wonderful prizes!! He was more excited than I was!!!! Ticket or no ticket that was the best day of my barrel racing wins!!

As for advice??? The best advice I could give anyone running barrels would be…. Have faith in yourself.  There are a lot of great riders out there WITHOUT great horses. There are men and women out there with the ability of achieve greatness in this sport. Not being mounted is the most awful feeling in the world if you are a competitive person. Don’t get discouraged. Take every run and learn something from it.  Don’t be afraid to ask for help. If the road to winning is your destination, then the journey there will build your character—don’t give up on yourself.

In 1963, my dad would rent a U Haul trailer once a year and pull it behind his company car and take me to the HOHC horse show in Houston. I was about 11. I would enter a 4 H show a couple of times a year.

Going to Denver Rodeo from Oklahoma, stopped to put a blanket on barrel horse as it was raining and getting colder, therefore I got in trailer to put blanket on the mare. She stepped on my toe and it took awhile to get her off. Needless to say, I had a black toe and sore foot. Needless to say hindsight is 20/20, and I laugh when I think back on it.– There I was on the side of the interstate, pouring down rain and very cold, inside a two-horse side by side trailer, in the front of the stall with the mare trying to put a blanket on her, with her standing on my left foot, pushing on her chest with all my might to get her off, and the harder I pushed the more she leaned against me and put weight on my foot. Ha-ha I do remember praying, and she finally got off.—Should of prayed before I ever got in the trailer. Ha-ha

Of course, my favorite horse would have to be my best buddy and traveling partner, “Smashed at Six”, better known as “Smash”. He is a 12 yr old AQHA gelding by Easily Smashed and out of a daughter of Streakin Six. He came to me by a trade when he was a long 3 year old and was somewhat of an outlaw. He had been started on barrels by Jim Warner, but after returning home decided to start bucking off his owners. I didn’t like him at all when I first got him and tried to sell him for $2500 for a year, just to get my money out of the trade (at that I was losing $1000!). But nobody wanted a plain sorrel that would turn barrels sometimes and run off other times. I had so much money in him by the next year that I decided I was just going to have to turn him into a winner, because I couldn’t get rid of him.

My most favorite win was the 98 Elite Derby in Glen Rose, TX. I got the mare 7 days before the Derby and it was the first competitive run at a BFA event. She had been giving her owner a lot of trouble and I turned her around. They ended up selling her as soon as we got home from the Derby.

The one that comes to mind was youngest daughter Stephanie and I were on our way to a barrel race when we had a blow out on the trailer, we were on the side of the road that was also in a dip in the road. Lisa and Sheryl Hammonds were running together that day, Lisa was driving her rig and when they topped the hill and could see us on the side of the road Lisa inquires, wonder if that is any one we know, where upon Sheryl answers “only your mamma”

First off, would you like to tell us a little about yourself? Yes! For starters, my name is Hailey *Halo* Jones. Where are you from? Im originally…

Where are you from? New Mexico When did you start barrel racing? When I was 3yrs. old Are you involved in any other equine events? I love to…

Where are you from? I am orginally from Grand Rapids, Ohio but being in the military and be married to a military member we move often…