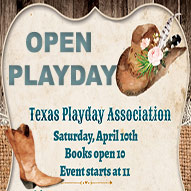 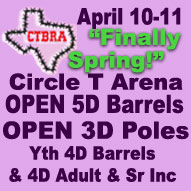 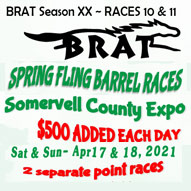 Where are you from? I live in Henryetta, Oklahoma with my Dad Gregg, My Mother Caroline, and my Sister Kaylee. We moved here in 1997 from El Paso, Texas. We also have a house in Ruidoso, New Mexico.

When did you start Barrel Racing? I showed jumpers on A Circuits and stayed very busy traveling and training. I did run Barrels and Poles at the NYRA junior rodeos winter series in 1997, 2000, and 2003. But, it wasn’t until winter of 2005 that I decided to stop Jumping and Train Futurity Barrel Horses full time.

Are you involved in any other equine events? My Father Trains Race Horses, he won the All American Futurity and Derby and has had several World Champions (AQHA & APHA), and I showed Jumpers and 3 Day Horses and I qualified for the Junior Jumpers Finals and Showed at the HITS Circuits (Ocala Catskills Indio).

Who or What got you started barrel racing? My Father has always pushed me to be the best at whatever I am doing. And After I stopped Riding Jumpers I really missed competing and having Dad there to PUSH ME! But, honestly my heart wasn’t into hitting the road showing jumpers again. 9 years of everyday training had taken it toll on me. Dad and I watched Jackie Dube do wonderful things on Jacks ex-racehorses… So, my father and I sat down and talked and we decided to become business partners.

On the road sometimes things happen, do you have an unusual or funny story? Yes! I have two or three really funny stories of being on the road. But this one stands out because it really was ALL MY FAULT! The first Colt I hauled and Exhb (that I had trained from the ground up). I decided to put my old saddle on him, and I hadn’t rode in a while, and I forgot I had taken the attachment piece from the back cinch to the front cinch off for my new saddle… Needless to say he bucked all over the pen and I was embarrassed but after that he worked really nice! (lol) Everyone BIG was there Betty Roper, Lance Graces, Teresa & Junior Follin, Cindy Arnold, Cody Bauserman THANK GOODNESS THEY WERE Warming there horses up and missed it. I felt like crawling under a rock!

What was the name of your favorite horse and tell us a little about it.  My favorite horse will always be Sonnys Lucky Bandit he is a 15.2 hand Sorrel Roan / Overo Paint Gelding. Dad bought him for me when he was 10 months old, back in 1998 I had him started over Fences and he won the Junior Prelims. In Boston, I got busy and sent him back home to Dad and he had a #9 Heeler ask if he could barrow him, Sony hit the road for about 9 months heeling, then when I decided to start Running Barrels I grabbed Sony and started him and in only 3 months of patterning and hauling he was in the 3-D at the Silver Cup in March 2006. But, I also love Mordis he was the very first futurity colt I trained. He won the 2006 Run For The Rubies Juvenile Futurity ($10,000) w/ Jackie Dube because I broke my leg in Nov ’06.

What are some of the events that you have won (or races that stand out in your mind)? Setting the Arena Record in 2003 at Grayson was pretty memorable and what makes it really special is it was the last time I hauled Top Gun. I knew that night when the weekend was over, I was going to retire him . Now, my 4 year old sister un-retired him and she runs him. Top Gun is a 1980 White own son of Bunny Bid. Another great memory was Making the Short go at the Speed Horse Silver Cup (open) on Sony, he had only been hauled maybe 10 times when I ran him there. And I will never forget Mordis winning the Juvenile Futurity with Jackie, she missed watching her sister Tammy live, the first three rounds of the NFR (’06) to stay home and ride him for me because I broke my leg!

Over the years have you noticed any changes in barrel racing what are the good or bad you’ve seen? From the point I stopped to the point I started back in 2005 I noticed that there are more people running at Jackpots around here. I think it’s because over time people realized it is easier to make money now, and more affordable. You don’t have to have an expensive 1-D horse to make money anymore.

What is do you think of an equal pay out 4d? Personally I love equal payout in the 4-Ds, I know LOTS of people don’t… But, when I am seasoning colts to sale, and riding lots of green horses it helps me out because they can hit the 3-D sometimes 4-D and I still make enough money to come back next week! And I think it gives people who can’t afford a 1-D a chance to still be GREAT!

Do you think of yourself as a professional barrel racer? I don’t know if I consider my self a Professional just yet… Just like my young horses I still need some hauling, training, and seasoning before I claim the Pro Status!

Who is your favorite barrel racer or barrel racers? My favorite is of course Jackie Dube, she is amazing!!! But, I have favorite things about riders that make me respect them. Jackie Dubes Aggressive style, her WANT to win, and the compassion she has for her horses. Latricia Duke has an amazing FEEL for a horse she can stay one step ahead of them and still stay out of there way she is awesome to watch! Cody Bausermans ability to ride anything and train winners every year! And I think Charmayne has a neat ability to understand her horse.

Do you have any advice for anyone just starting out in barrel racing? When you first start out doing anything you have to DREAM BIG! If you can’t day dream and see your self doing great things than you can’t. Barrel Racing comes with it’s highs and lows just stick with it and ASK LOTS and LOTS of questions don’t be afraid to make mistakes (even BIG ONES) and remember PRAYER and HARD WORK PAYS OFF! If you ever have questions you can e-mail me at FeelingOhSoLucky@aol.com