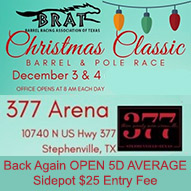 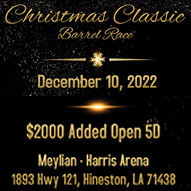 Since I was a little girl, I have been involved in the sport of barrel racing. I don’t think even given the chance I could’ve been involved in anything else but horses. I am the daughter of a barrel horse trainer who trained for over 30 years for the public (Sallie Dishman-Kelley who owned Kelley Training Stables,  who now is remarried and is Sallie Burleson, Burnet, Texas). My mother had me mounted on anything & everything at a early age. With her “push” I have been riding now for over 35 years.

I have been very fortunate to have ridden some great horses and become acquainted with a lot of very special people in my years of barrel racing. I would have to say that my encouragement has come from some very special people, of which one is my mother. She has ever so graciously handed over winning horses when they were winning for her and allowed them to become mine so that I might be a winner too.

One special example is when I was given her good horse, Full Speed Rebel, which some may remember as “Reb”. I was probably only 11 yrs old and granted had ridden some good horses for that age, but he was a real champion. She had already won the Austin County Livestock Show and Rodeo on Reb several times, been the Ft. Worth Rodeo’s Reserve Champion twice and pro/open champion many times over

most everywhere. I wanted to ride him so badly, but was scared to death of him because he was a big, stout powerful horse.

When I was nine I tried to ride him around an arena at a walk and he broke and ran with me sticking my head through a pipe fence and giving me a concussion. One day I got my courage up and wanted to sit on him so when he was tied up to my mother’s inline trailer I slipped around and jumped on top of him. He and I had a long talk that day….probably too long a talk because, to my surprise, my mom, the late Allison Powers and Kay Cervantez caught me sitting on him. He could be a fractious kind of gelding and you should have seen the looks on their faces. I guess she realized how badly I wanted to win and from that day forward Reb became mine.

I went on to break her arena record at Austin later that year on him and win the rodeo. I know she could not have been happier. Later in the 80’s she gave me another gelding she had trained named Bexar Claw aka “Bear” which I ran and broke the same arena record on and won the Austin Rodeo again. I won quite a bit on Bear.  Bear was a futurity money earner at the North Tx Futurity, Wichita Falls Futurity, and Ft. Smith Arkansas ran the fastest time at Ft. Smith in the short go, but hit a barrel, won two large barrel futurities in Oklahoma the same year. Bear was ridden in futurities by my mother and Renee Youree Ward.

I won or placed at 62 barrel races/rodeos the next year on him which was a lot to go to then. I was the Nestea/PRCA Top Hand Challenge Champion for Texas on Bear. Won numerous saddles, buckles and other awards on him, just too many to list.

Besides my mother, I credit Dale Youree, Addington, Oklahoma. Dale’s way of riding and style would want to make anyone become a champion. Dale encouraged me to ride correctly at a young age. He had as many criticisms as compliments for me, all trying to point me in the right direction.

As far as professional women barrel racers, I’d have to say that I would admire Wanda Bush for the way that she always put a handle on her horses and her competitive spirit (she is also the toughest woman I know besides my mother), Martha Josey for her devotion to promoting barrel racing to youth riders, and Janet Stover for her ability to hang tough. Janet is one person who never gave up on herself when times got tough.

If you don’t think she’s seen good times and bad, you either don’t know her very well or not at all.  She is absolutely one of the best riders I know.

Today I am training and selling a good deal of young, broke, started horses. I deal with a lot of problem finished horses and do a lot of tuning on finished horses for everyone from novice riders to wpra cowgirls. I compete in several Texas based barrel associations and ride in a couple of futurities/derbies as time allows each year.

helping my daughter as she is starting to run barrels herself.  I have placed a lot of nice pro horses in the past years that are winning with their riders…i.e.  Liz Loeffler Pinkston purchased Pistol (who won the California Circuit Finals with Tona Wright this past year) and Project Lightning who is a top wpra horse and consistent 1-D winner in the D & G’s.

I also trained the ‘99 Texas NBHA SR 1-D champion barrel horse, Jet To Texas, which my mother rode to that win. He also was in the Top 10 1-D in Augusta GA. I have ridden and trained a top 1-D horse, Ima Flashy Fuel (currently owned by Lori Marsh of College Station), “Flash” carried me to the short round in the NBHA TX 1-D finals in ’97, and numerous association, district 1-D and series championships. I recently finished training a young mare who is a tough winning 1-D horse winning in the GA. High School Rodeo Assoc. to name a few.

I feel very fortunate to have been able to sell and see successes with my horses in Texas, Oklahoma, Louisiana, Florida, Pennsylvania, etc. I compete mainly here in Texas, due to family ties. I have two sons, ages 15 & 13, and a daughter, age 11 who is starting to run barrels. My husband Steve of nearly 17 years is also involved with my horses. He keeps me on the road, most everyone sees him with me everywhere I go. He is either leading a horse or working on someone’s truck while we are there. We live in Hamilton Texas and I ride part time for customers and own a hair salon. While I am unable to compete pro-fessionally and haul down the road, I consider being a professional barrel racer a goal that I’d like to do at some point in my career willing that the right horse comes along, and the timing is right also.

As for advice??? The best advice I could give anyone running barrels would be…. Have faith in yourself.  There are a lot of great riders out there WITHOUT great horses. There are men and women out there with the ability of achieve greatness in this sport. Not being mounted is the most awful feeling in the world if you are a competitive person. Don’t get discouraged. Take every run and learn something from it.  Don’t be afraid to ask for help. If the road to winning is your destination, then the journey there will build your character—don’t give up on yourself.